Last night in Cambodia, CNN ran two video reports about our partners AIM and the work in Svay Pak. It provided great exposure to the ministry. As I sat doing work, CNN aired the program 3 times in 3 hours. I think its awesome that more people are learning about the issues of child sex trafficking.

For us at Ratanak, we have had the privilege of working with AIM since 2005. In 2007, Don & Bridget Brewster felt led by God to start up a kids club in the heart of Svay Pak---that notorious brothel district that is renown around the world as pedophiles paradise. One of the places they rented was a former brothel---a place that was once the crime scene of one of Brian McConaghy's (Executive director of Ratanak) investigations. They began to host a kids club outreach in the front area of the former brothel for kids in that community because the actual building was filled with many cells that we often called rape cubicles. It was not easy for the Brewsters to start such a ministry because the community was not very welcoming,  but they stood firm believing that God had called them to reach the people of Svay Pak for Christ.

In May 2008, a Ratanak team from Vancouver had the arduous and challenging task of breaking down all the cells in that former brothel (now known as Rahab's House) except for one cell which was kept as a reminder of the horrendous environment  in which many girls lived in. As each wall came down, more light could be seen  almost symbolic of the light that Jesus was beginning to shine in that place. When the team finished all the renovations, what stood before them was a whole new building full of light and life as kids started attending a kids club, a medical clinic got started and so did a church. The Lord was not just visiting Svay Pak. He had moved in to take residence!

Within a year all the activities in Rahab's house outgrew the small space and once again we at Ratanak had the wonderful privilege of buying a former brothel that was being built in Svay Pak. It was 80% completed but the owners felt it was too high risk to finish the building because of the Christian presence and the surveillance that was going on at that time. And so God provided the funds in a short space of time and in May 2010, The Sanctuary (also called Rahab's House II by our partners at AIM) was opened.

Once again, God had redeemed another building. But buildings are just walls and beams. They do not tell of the stories and the lives of many who have lived or visited them. What they do represent however, is either a place of hell or a place of hope. The former brothel that is now called Rahab's house was hell on earth for many little girls who were tortured and who died of AIDS there. When I first visited that building in 2007 there was a door/window with iron bars at the back of the building that was crudely cemented together. There was no escape from that hell hole. There was no way out.  So last night when I sat and watch my little sister Phally give her testimony of how she had been raped in that former brothel as a five year old, my heart went out to her. (see link to CNN report below) It does not matter how many stories I have heard like these, they break your heart because they break God's heart.

I have known Phally for over a year and I had heard many parts of her story but last night was the first time I discovered that she too was trapped in that horrible brothel. Phally's father was actually a security guard in that former brothel. It was a family affair, except in his case, he was responsible for keeping the girls locked up while she had the opposite experience of being held in captivity. There is a level of betrayal in her own story that is hard to understand. Can you imagine being raped as a five or six year old and your father is also working in the very place where you are being devalued and dehumanized! Your father who is suppose to be the one to protect you is in fact contributing to your abuse. How does a child begin to deal with such a betrayal?

CNN focused on Phally's past, on the hopelessness, on the pain, on the suffering that she endured. But today, I want to focus on the new life and new hope Phally has found. The pain is still very much there as was evident in that interview, but Phally's pain is not for naught. Phally has met a person who can understand and identify with her pain and who can help her begin to heal from that pain. That person is Jesus. Jesus knew suffering, Jesus knew torture, Jesus knew betrayal by those closes to him. Jesus was mocked, shamed and cursed on, just like Phally.

In Jesus, Phally has found One who can not only comfort her but who understands her pain and who gives her a reason to have hope. He has been collecting her tears because every teardrop of hers matters to Him. God has and is redeeming her life each day. Unlike many girls who are rescued and go to the Newsong centre, Phally began to learn English at Rahab's house in 2009 while she lived in Svay Pak. Last summer, I had the privilege of baptizing Phally. She became a believer through the ministry of AIM and through the wonderful Khmer staff of Pastor Chantha and Bunthan who ''adopted' her as one of their children. If you have been following this blog, you'll know that Pastor Chantha and Bunthan tend to ádopt' alot of children. While Phally still lives with her mother, she has often experienced verbal abuse and is constantly pressured to give up studying at school and volunteering at The Sanctuary because her mother wants her to go and work at a coffee shop---another front for a brothel. She faces persecution on a regular basis because her mother does not work. She gambles and expects her daughter to support her addictive habit. But Phally knows that she has ''parents' in Pastor Chantha and Bunthan who are always there for her. They model for her the kind of parental love that her own parents could not and did not give to her. They love her and demonstrate the Father heart of God to her by their very acts of kindness and tenderness to her. They have walked with her through difficult situations and encouraged her in her faith journey. The Lord in His infinite wisdom always provides a way out for those who are crushed in spirit. He will redeem our pain and our brokenness by connecting us with others who are 'Jesus in the flesh' , who tenderly care for our wounded souls. This is what Pastor Chantha and Bunthan have done for Phally and for many of the other young disciples who they are training up to be the future leaders of Svay Pak.


But that is not the end of Phally's story because Phally is a leader. She teaches English to the younger kids who attend the school in the Sanctuary and also teaches the bible lessons at the kids club. But she is also the worship leader at the weekly Sunday services in the Svay Pak church. She has discovered a passion for worship. She loves to worship the Lord through song and through playing the drums. God has turned her mourning into dancing and as she dwells in the House of the Lord she has begun to sing a new song, a song of praise, a song of thanksgiving to the One who is healing her brokenness and making something beautiful out of it. You will see her dancing and leading the praise time full of laughter. The joy of the Lord is indeed her strength. It is He that she holds onto when the pain seems too much to bear. I have witnessed that in her for there are times after the worship service or after the kids club, Phally will be by herself on the 3rd floor where these events happen. She will sit there listening to worship music with tears in her eyes as the Lord touches her and ministers to her through a song. At her young age, she is cultivating an intimacy with her Heavenly Father and in so doing, He is showing her how He is caring for her soul and how He wants to lavish His love over her. 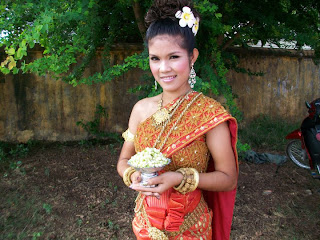 As for her earthly father,  last year while I was serving in Svay Pak the police came to arrest him for trafficking another young girl. Phally was not happy and felt he was wrongly accused but those who know her family, know otherwise. He had a history of trafficking young girls. Here it is, a young woman so willingly wanting to protect her earthly father from going to prison. How ironic is that, when he himself was entrusted with the role of being her protector but instead did quite the opposite. Phally exhibits a level of grace, mercy and love towards her father than can only be attributed to Christ. She has visited him in prison, concerned for his health and his safety and has prayed for him. How ironic is that, that he now is in a prison and she has been set free from her prison of sexual slavery!

As you think about Phally and as you pray for her, it is the photo above that reflects the truths that God has shown me through Phally's life. He is raising her up to be planting of the Lord for the display of His splendor for what He has started in her, He will complete! She is no longer a child sex slave, she is a princess, a daughter of the most High God! I praise God for Phally's courage and boldness to share her story in all its ugliness. Despite her pain, she has chosen to speak up and give a voice for the many girls who do not yet have the courage nor the voice to do so. The Lord is redeeming Phally's pain and tears day by day. Psalm 126:5-6 says: Those who sow with tears will reap with songs of joy. Those who go out weeping, carrying seed to sow, will return with songs of joy, carrying sheaves with them. Indeed, Phally has been sowing her tears over these many years, but with sowing there is the promise of reaping.  In the years to come, we look forward to seeing the songs of joy that God will unveil in Phally's life.

If you would like to read  more about Phally's life and her sister. see the attached blog comment below that I wrote about in July 2010 called 'Two Sisters"
http://ratanakmissions.blogspot.com/2010/06/two-sisters.html
Posted by Lisa at 9:25 PM